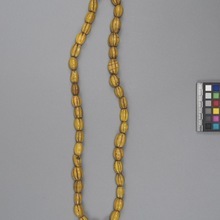 Trade beads strung together on a clear plastic cord. The beads are ellipsoidal-shaped with lengthwise grooves.