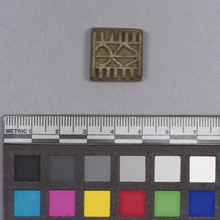 Thin square-shaped gold weight with raised designs on top. Design consists of a circle and diamond inside of a rectangle with a line running through the centre, dividing both shapes in half. Plain lines extend from left and right sides of rectangle.