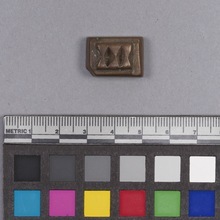 Thick rectangular weight with raised designs on top. Design consists of three connected hourglass-like shapes in a row. The negative space between the hourglasses creates a repeating diamond pattern.